Eighteen years ago, Mr. Dunn spoke to a jury for the first time. On behalf of “The People of California” through the Office of the District Attorney for the County of Los Angeles, in the City of Compton, Mr. Dunn asked that jury to convict a young man for domestic violence and brandishing a hand gun. Working as a post graduate law clerk for the L.A. County District Attorney, Mr. Dunn also prosecuted jury trials on charges of theft, drugs, guns, DUI (Driving Under the Influence), and auto burglary. He handled preliminary hearings and motions to suppress evidence on serious and violent felonies. After that initial courtroom experience, Mr. Dunn went on to clerk for the Hardcore Gang Unit in both Compton and at the main courthouse downtown. There he worked under Michael Genelin who developed many of the anti-gang policies, strategies, and tactics used throughout the nation today.

One of the lessons taught by senior Deputy District Attorneys is this: nobody tells you the truth. Witnesses have imperfect memories, victims are impacted by trauma, and police officers and detectives have their own agenda.

Upon completing his clerkship, Mr. Dunn began his private practice, and quickly developed a reputation as an aggressive advocate for his clients. While many attorneys are afraid to go to trial, Mr. Dunn has always loved arguing for his client to a jury of their peers. At this point, Mr. Dunn has tried over eighty jury trials. That’s a level of courtroom experiences that very few private attorneys ever achieve.

Although 95%-98% of cases are resolved by settlement negotiations or dismissed on motions, it is still the jury trial that is the centerpiece of the justice system. As the saying goes, the best defense is a good offence. And you have the strongest negotiating position when the other side knows you’re ready, willing, and able to lay out the facts to a jury.

When Mr. Dunn began to take on police abuse cases, also known as § 1983 or civil rights cases, he met his good friend and mentor, Michael Marrinan. Mr. Marrinan is a renown civil rights attorney and now on the faculty of the Trial Lawyer’s College. Mr. Marrinan introduced Mr. Dunn to the Trial Lawyers College, founded by the greatest living trial lawyer, Gerry Spence.

“I feel like the Trial Lawyer’s College taught me how to speak to a jury for the first time; from the heart, with the truth, the whole truth, and nothing but the truth. Most jurors distrust attorneys. They feel like we’re just out to trick them—and too many lawyers justify that mistrust. Someone aptly described the American Jury as ‘the greatest B.S. detector the world has ever known.’ The only way to win with a jury is to find the truth in your case, love your client, and be fair to the witnesses and honest with the jury.”

Mr. Dunn stands by that philosophy in every case that he handles, whether it’s a misdemeanor petty theft, a DUI, a sex crime with life-long registration under Penal Code § 290, or a serious or violent felony. It is one of the keys to his success.

Another aspect of Mr. Dunn’s successful advocacy is the range of his abilities. Mr. Dunn fights for his clients on every level. He is one of the few trial lawyers who can also bring the fight to the appellate level. Mr. Dunn has won victories on writs and appeals in the Superior Court, at the California Court of Appeals, in the Ninth Circuit Court of Appeals, and his most famous decision, Brenner v. DMV((2010) 189 Cal.App.4th 365), was affirmed by the California Supreme Court. Brenner changed the law in favor of the arrested driver, and, thanks to the California Supreme Court’s blessing, it is the law of the land in California. 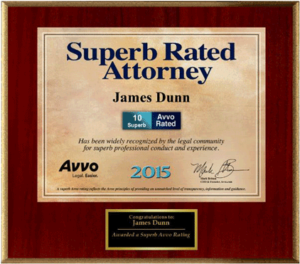 Mr. Dunn is admitted to practice in all courts in the state of California, the United States District Courts for the Northern, Central, and Southern Districts of California, and the Ninth Circuit Court of Appeals. He is a member of the National Association of Criminal Defense Lawyers, the California Attorneys for Criminal Justice, the National Police Accountability Project, he attended the National College for DUI Defense in 2005 held on the campus of Harvard University, and is a Specialist Member of the California DUI Lawyers Association. He also has a 10.0 “Superb” rating on Avvo.

I had been kicking back with friends and drinking beer all afternoon. On my way home, I ended up getting into an accident. Nobody was hurt, but the driver of the other car called the cops. I was freaking out. My license was suspended at the time. My breath test was .21, and even Mr. Dunn told me my chances were slim to none. But at that point in my life, a conviction would have destroyed me. So I put my faith in Mr. Dunn and told him to take the case to trial. He was awesome. Not Guilty on all counts! He also won back my License.